We Finns are an odd bunch when it comes to being social. In the winter, we are not very social. In the summer, we are the opposite. Or what do you think of this? A dinner for a few hundred strangers on a road in the city center.. 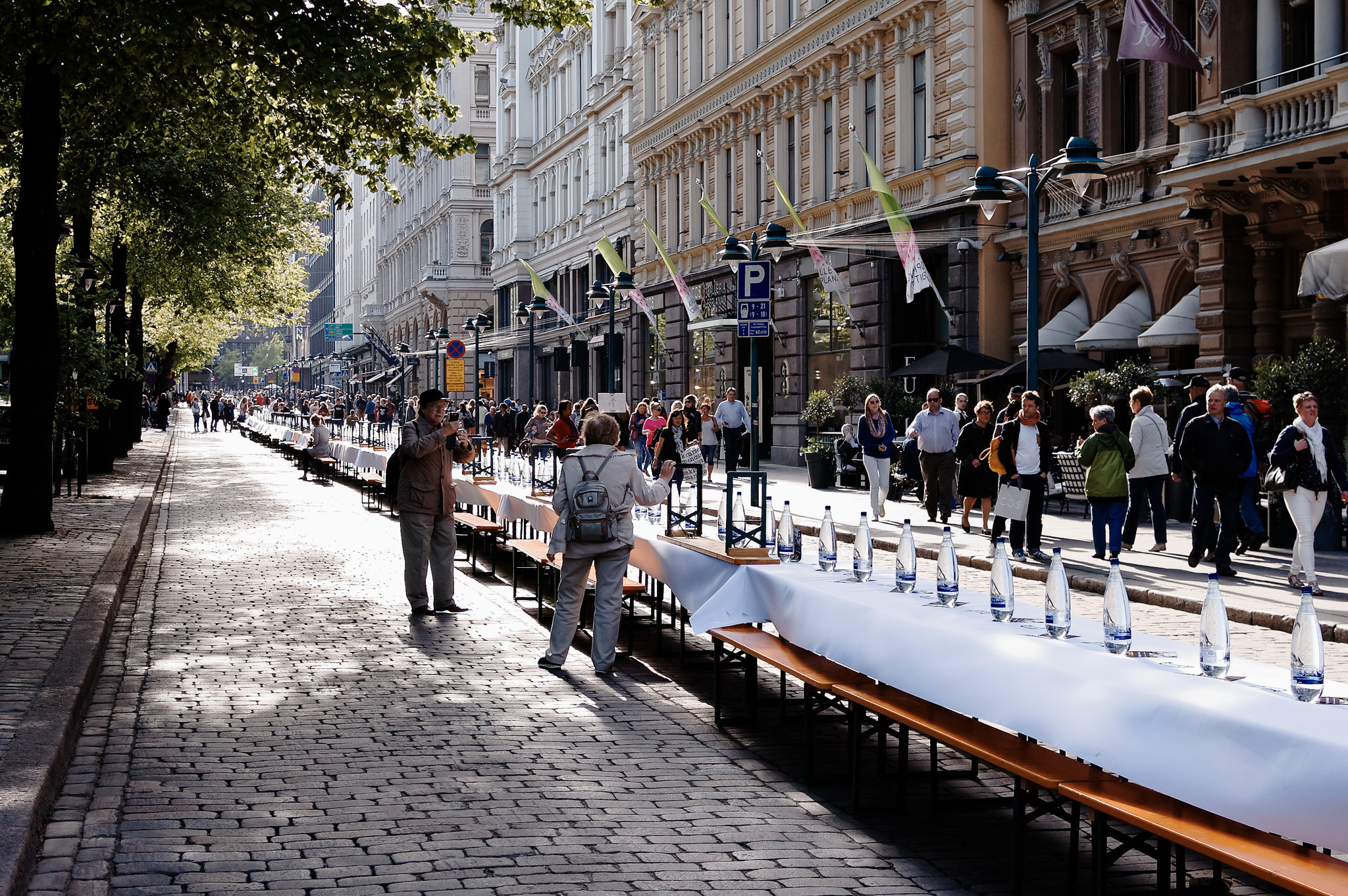 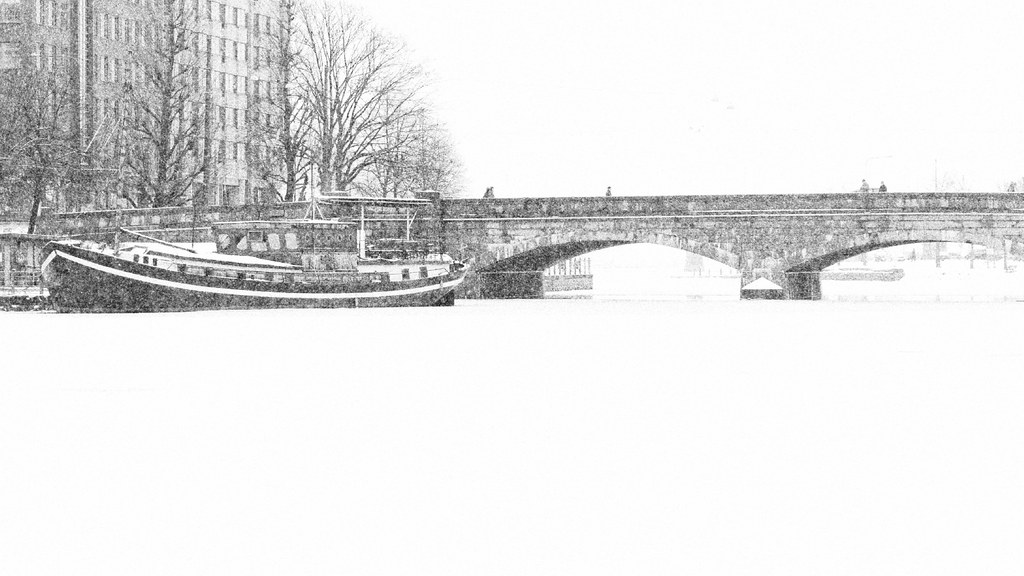 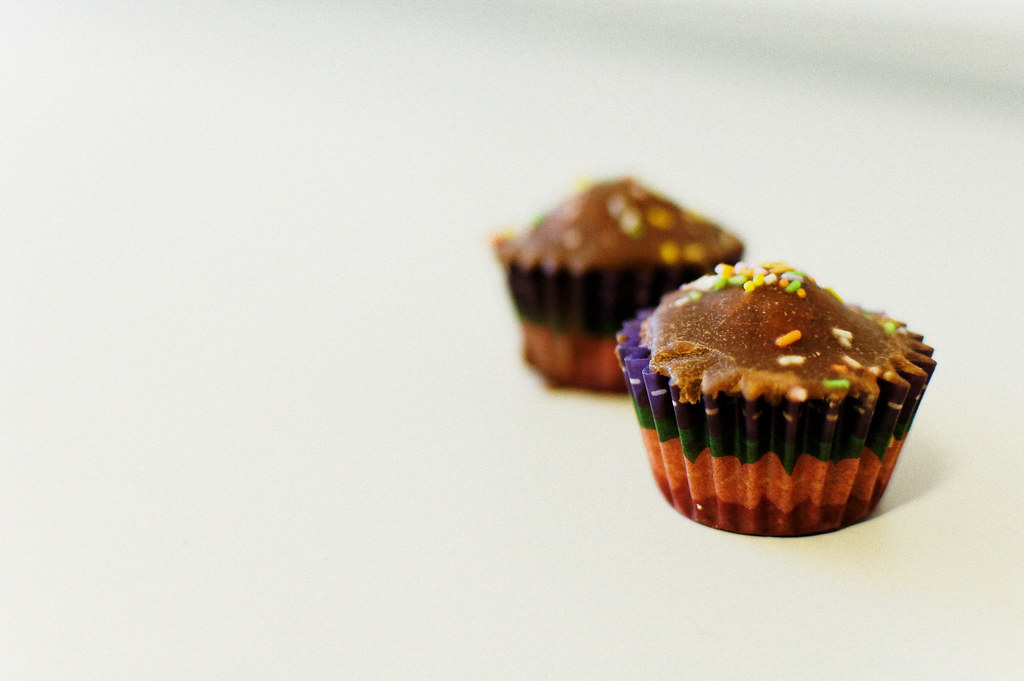 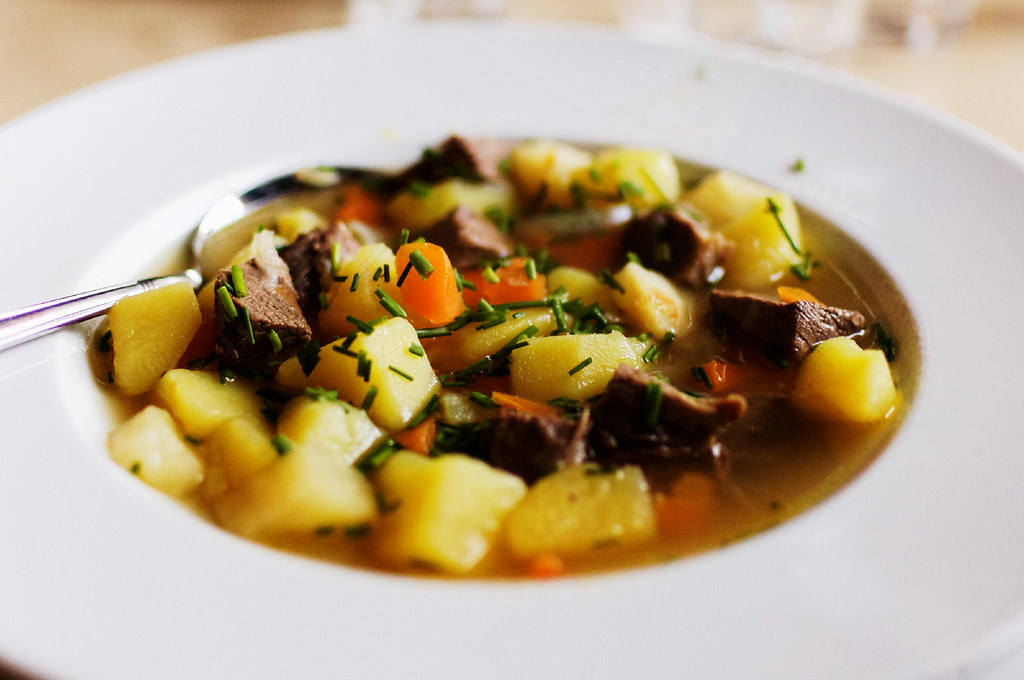 Happy new year! Lets make 2015 a great year for everyone!

I dream of great trips for the coming year. My list includes Lapland, Iceland, Cuba. Maybe Cappadokia in Turkey as well. We shall see. Hopefully I will be a better person and a better photographer.

I had the chance to visit the largest camera &electronics fair in Finland. Digiexpo is a yearly event and is often the first place to get to play around with new models. There were models introduced in Photokina so new models with also some very good discounts for buying at the fair. Here are some thoughts on cameras if you are interested.

The highlight for me this year was the new Samsung NX1. Got to play around with one that had the grip on it and a 16-50 F2 -2.8 lens.  Have to say that it impressed me as much as the Fujifilm XT-1 last year. Maybe even more considering the different backgrounds of Fuji and Samsung.

The NX1 felt good in my hand size-wise and the focus was really fast. I am used to pro dslr focus speed and that felt as fast. Very nice. The evf and screen were excellent as well. I would really, really love to have one for a while and see how it is to use with time. I have no doubt one could create great photos and video with it. The NX1 has specs that are pretty much class leading in everyway.  It can do 4k video and should be similar to the Panasonic GH4 as well. I Hope they sell well and continue to bring good lenses to the market as well. I think they should also try to get  Zeiss to make Touit lenses for the Nx system as well.

As a side mention I as a very large handed fellow feel that almost all mirrorless cameras need to have an accessory grip for me to have a good trusting hold on it. Same goes for the Fujifilm XT -1 as well as the Olympus EM-1.  Almost unusable without a grip. The Sony A7 series is quite similar as well. I just love the fact that cameras are getting lighter and smaller so as to be more travel friendly but it has its downsides.

The Fujifilm XT -1 Graphite looked really nice and old school and X100T was nice as well. Love them both. But with the above caveat. XT-1 with grip and a couple of primes would be really nice to have as a smaller system.

Got to play around with the D750 Nikon as well. First feelings are that it is a bit differently molded and even though it is much smaller than the Nikon D810 it seems to give a good grip. Still on my list of going to buy at some point as I have a lot of Nikon F-mount lenses already.

The Canon 7D mk2 was also present and it is very good and seemed to focus very good as well. Good camera if you shoot sports of birds etc.

.. And to celebrate the fact, Neste Oil, the main sponsor of Rally Finland did a publicity stunt and brought the rally cars to the city of Helsinki. The idea was to build a nice small street track (c.850m) on which current rally drivers and older legends would drive upon. The legends being guys like Kankkunen, Mäkinen, Grönholm etc. and of course current drivers include guys like Mads Östberg, Sebastian Ogier and Finns Latvala and Hirvonen. 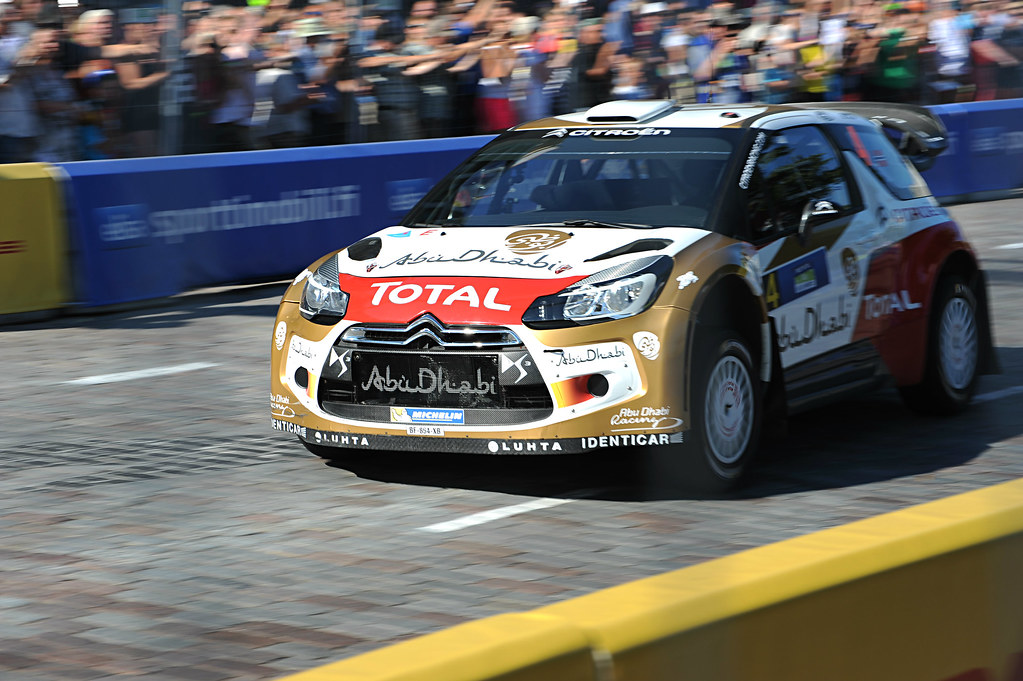 The weather was totally perfect for the event and there was quite a large crowd following the happenings. Almost +30Celsius was a bit demanding as there was not enough places with shade to watch from. A lot of water to keep hydrated was the only thing to do. 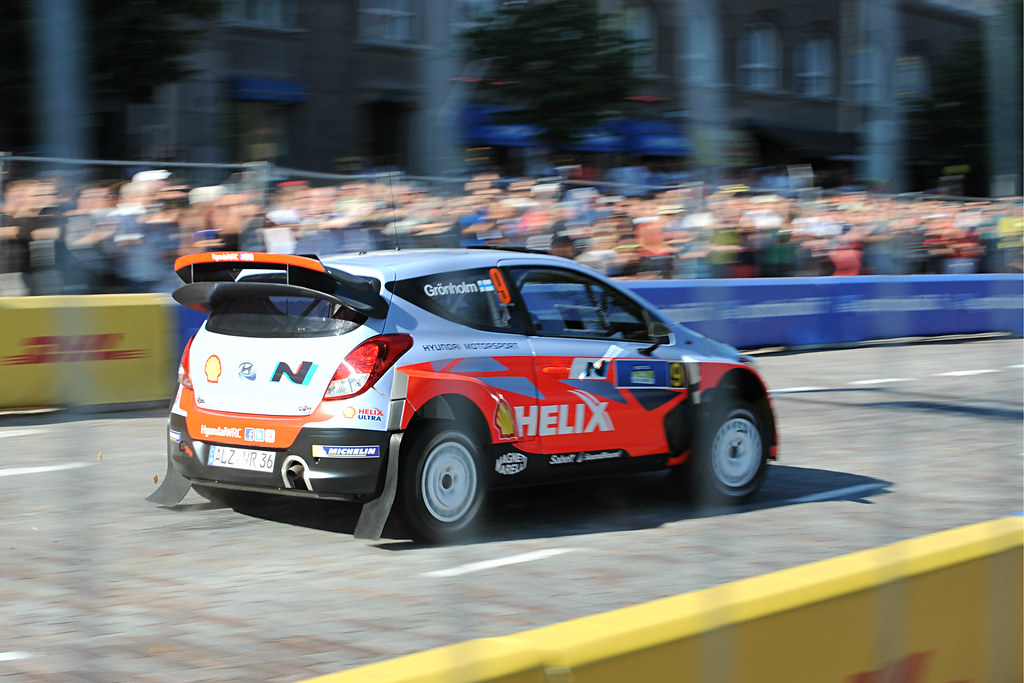 Marcus Grönholm, a retired double world champion. He drove for Peugeot and Ford amongst others. One of all time greats.

I had a dual purpose for this day. First to see some of my favorite drivers doing what they can do so well. As a Finn I grew up listening  of and seeing the bravery of guys like Kankkunen, Vatanen, Alen as well as Henri Toivonen. To see those guys drive is always a great pleasure. Secondly as  a photographer, this was a fun day to try to capture some of the speed of the day and improve my panning technique as well. 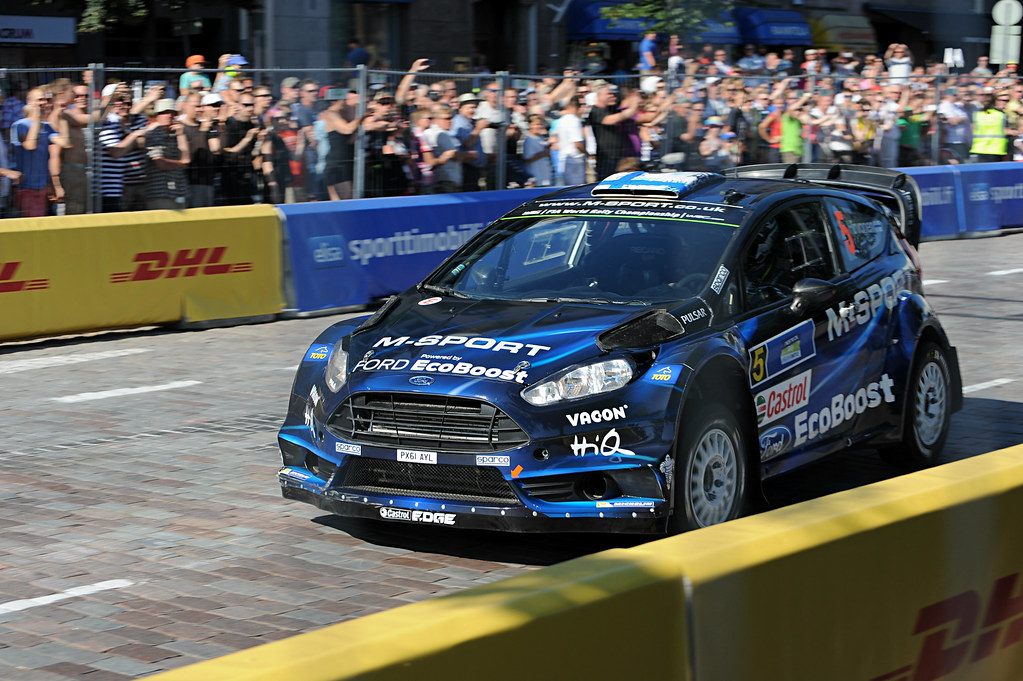 Mikko Hirvonen, still currently driving in the WRC, has been a works driver for both Citroen and Ford.

The photos above are to me OK, but not totally great. Unfortunately the amount of people meant that I could not get into a nice place to shoot so I was limited in many ways. I also found the cars to be really fast and thus hard to keep tracking and focusing upon. But anyways a lovely event, a great day. The weekend will show who is the fastest driver this year in Neste Oil Rally of Finland. I am hoping for it to be either VW driver Jari-Matti Latvala of Mikko Hirvonen. Last year the winner was ruling world-champ Sebastian Ogier from France (driving the VW).

Posted on 14/07/2014 Posted in misc, photo of the dayTagged football, germany, photography, weekendLeave a comment

Weekend was and went. Quickly, sleeping and swimming. And football! Congrats to Germany and all Germans for the well deserved win! 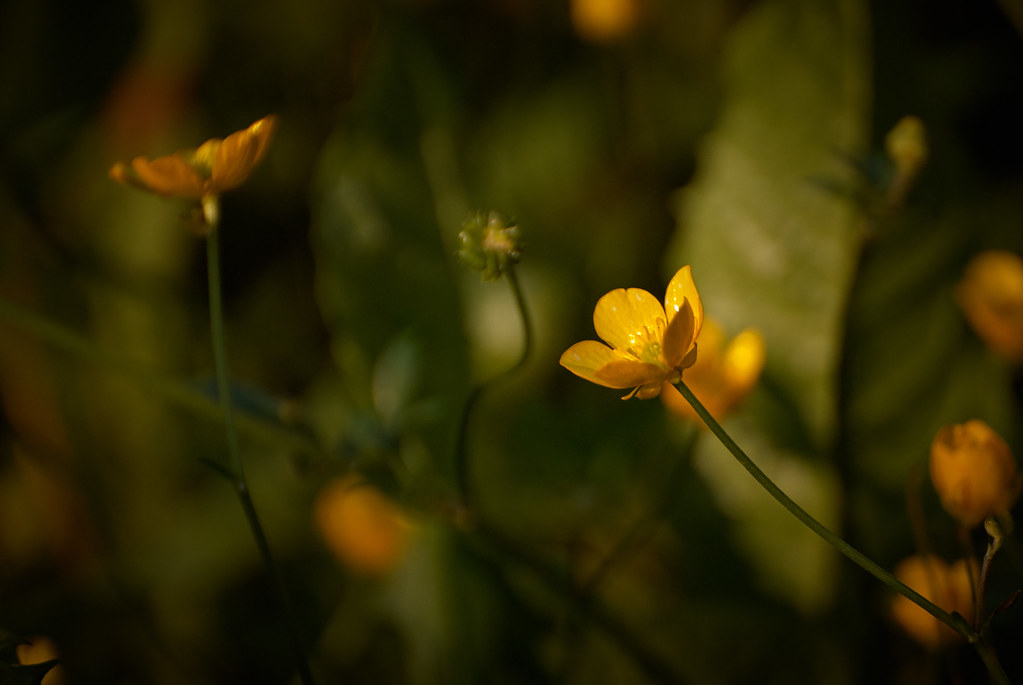 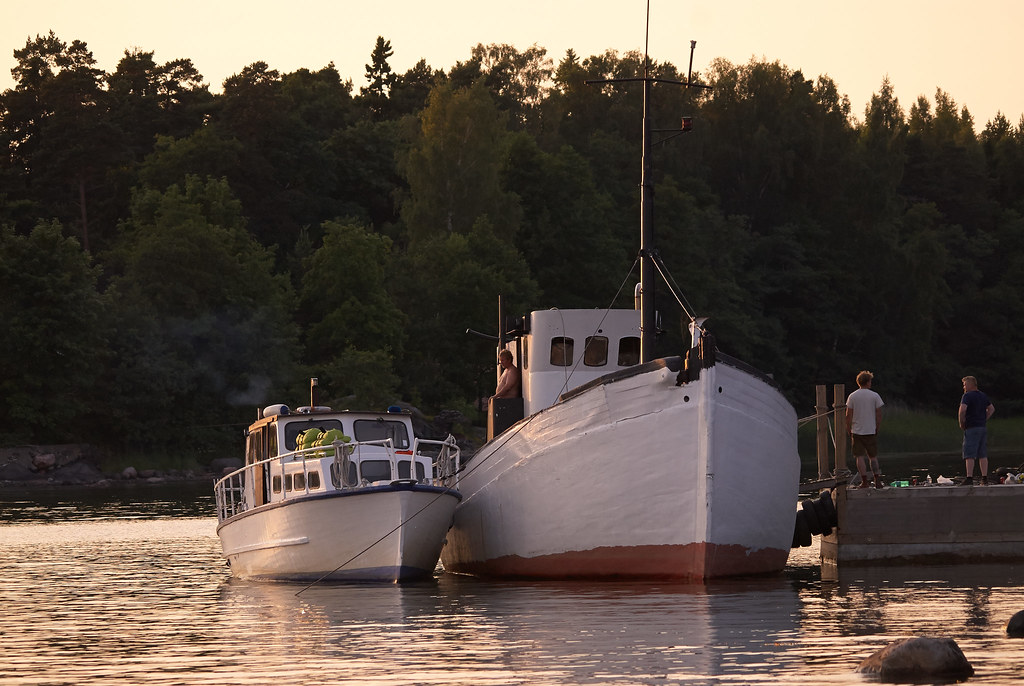 Cloud services are all the rage nowadays. Now there is a newcomer on the block, which hails from my homeland. Younited by F-Secure is a cloud service which provides added security and also compatibility with other clouds like dropbox and oneDrive (formerly known as skydrive). I will be using Younited and will see how it fares in my use. This photo is of their fun campaign with SOME in the form of a giant hashtag.

As a self-admitted geek I have always enjoyed technology in its different forms and variations. As as Finn it was always nice to read how Nokia dominated the mobile markets for over a decade. With the advent of iPhone and Android Nokia has lost some of its glamour, although I still like the models the company is doing now. The Lumia series is lovely, the newest models in particular. With the discontinuing of Nokia / Intel software collaboration of a mobile OS called Meego I was a bit saddened.

However a bit later it was announced that that project would live on, and a small Finnish company called Jolla was formed to this end. Today is the long-awaited day when they finally released the phone to the public. Below is the video:

I love the simplistic elegance of this phone. A worthy successor to the Nokia N9 which used the earlier version of Meego. (the N9 form language lives on in the Lumia models)

I cannot wait to get to test this phone. One of its great points is that it can run all Android based apps as well (both use Linux core).

What do you think?

Sparkly little things can be nice to look at or photograph.

These ones looked to be nicely placed so snapped a couple of casual snaps.

Madein Finland or somewhere else, I do not know, but..

So another year has passed. A year of laughter, love, hurt and traveling with a lot of work thrown in the mix as well. Great experiences. I believe I have personally grown as a human and I think that is greatly due to the people in my life.

And now a new year to do so much more and hopefully see even more.

Lets look forward and be positive! Be dynamic and live life to the fullest, for life is a precious thing.