Just a quick post to remind those of you who are living in Finland about the City -web magazines campaign for eating with a bargain price of 10€ in the bigger cities of Finland. More info in the link.

Streat Helsinki Eats was a street food festival that had a huge amount of partakers in the weekend in Helsinki. Great food, social life, cold weather! 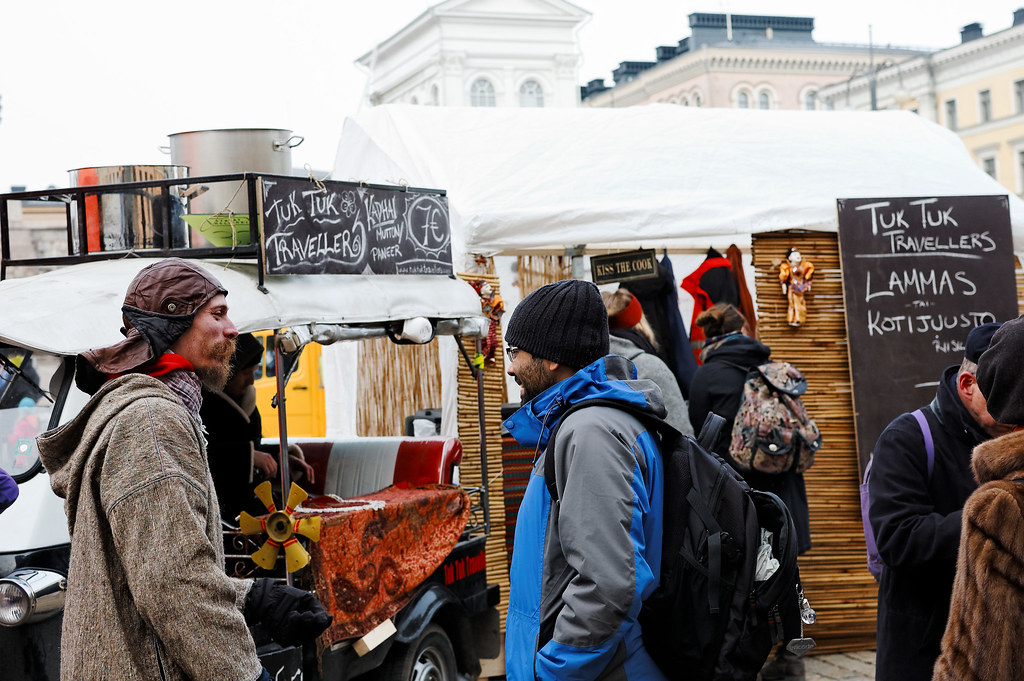 Sometimes the simplest things are the best. Take for instance food. It does not need to be always mega-hyper complicated to taste great. 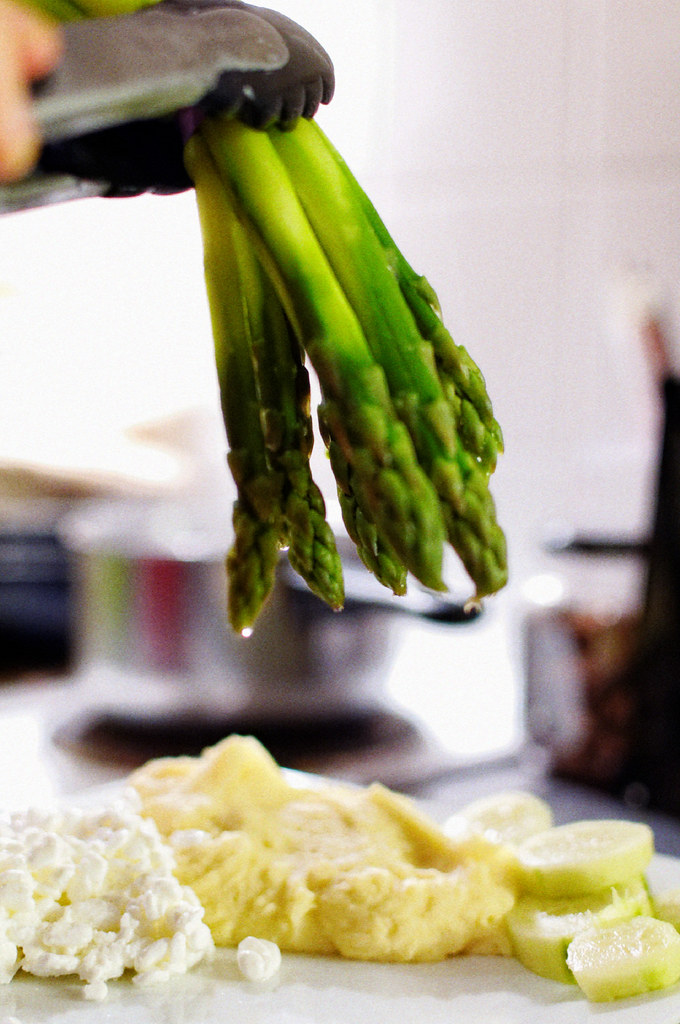 This was just a moments thought and a few minutes of preparation. Fresh asparagus, mashed potatoes with a spot of cream and butter 🙂 and fresh veggies on the side. Cottage cheese to give some protein. A bit of work to get the potatoes peeled and a boiled, all in all from preparation to the plate in under 25 minutes. The taste, well excellent is the word I would use!

In Finland as well as Sweden it is customary to have big parties and enjoy eating crab amongst friends and family. Of course it is also a good excuse to drink wine or even snaps of vodka..

It is also a smells a bit of the old class-system as it is very much a thing of the more wealthy people (more and more also the normal middle-pay people as well).

Still, it is very much a Finnish thing to do in the autumn when the season  for crab is here.

The eating is very much a messy affair with very little meat to be eaten from one crab. The main Part to eat is in the rear and then a bit in the scissors.  There is also a delicious fluid in the crab which is customary to be sucked out.

The crab are usually served alongside toast and are eaten as an apperative as it is not very filling.

Excellent meat to eat as main course after enjoying the time spent playing with the crab..

And a nice dessert. Perfection.

This nice three-course dinner was eaten at restaurant Sunn beside the Senate square in the center of Helsinki.

As one of the main focuses of this blog has always been food, I have been a bit sad to have so few restaurant reviews in the last few months. The reason being, I have eaten more at home or at the same familiar places which have nothing new to report of.

However a new acquaintance came in the form of Empire Plaza. The Chinese restaurant located in /beside Kamppi shopping centre, at the heart of the city. A place which I have often thought of visiting but have for some reason or the other always passed by. Either because of the restaurant being full, or because of a craving for a different sort of food. Finally I had the chance to visit and eat at this restaurant.

First impressions.  A rather large and comfortable restaurant with a nice atmosphere. The waiters are very accommodating and the serving works as it should. Menu is already on the table, and drinks come quickly. Price wise not the cheapest Chinese restaurant in Helsinki, but also not too expensive and in-line with the look of the place.

The menu was quite large and consists of vegetarian, meat and seafood options as well as Dim Sum.  There were also enough spicier versions for those wishing their food has a bit of bite..

One of the restaurants specialties: sizzling food. This portion was King Prawn skewers in satay sauce. Excellent. And the sizzle was spectacular as the sauce was poured on the hot plate.

My choice for this visit was a wok called Nam Yu. The food included bamboo shoots, cabbage, mushrooms, noodles etc. The portion came in a beautiful wooden carriage. Great looking, and the food tasted excellent as well. Only trouble was I am not good in eating with “sticks” so had to resort to fork and knife halfway through. Not a fault of the food, but my own. Need to practice more..

In conclusion, Empire Plaza was a positive restaurant to visit and I will be definitely visiting it again sooner rather than later. Probably to eat some properly made Cantonese duck.

As food is one of my passions I have always loved the Restaurantday concept created by my fellow Finns. Lovely to see how the idea has turned into a huge event that is now multi-national and really a great addition to any city’s food culture.

Here are some photos I took on the latest Restaurant Day in Helsinki. Had a blast!

Sushi is not exactly my favorite food, but I have learned to eat it (for various reasons). It is not a suprise that some Sushis taste better than others, there are after all differences in all foods/restaurants. One of the easiest to eat ergo in my mind also the best Sushi can be found in Hakaniemi at a place called Rice Garden.

The restaurant is fairly large and has a relatively nice price for different portions. Miso soup comes naturally as standard fair as well as tea/coffee afterwards. The restaurant has very nice lunch options as well as the more expensive fairs in the evening.

This portion was the basic smallest lunch version which starts at 8,80€. All varieties taste pretty good, and I am told by a Sushi lover that these are some of the best Sushis you can find in the Helsinki region price/tastewise. Totally recommended for those of you that like the taste, or would like to give it a go!

As pizzas goes I am a regular pizza guy. Pan pizzas for whatever reason are really not my preferred way of eating this type of food. Maybe its the fact that some pizzerias tend to make these portions way too small?

Needless to say this means when ordering / making pizzas I tend to gravitate towards the thinner crusted pizzas and sometimes it feels a little dull.

A good tasting pan pizza really is great when done properly. With enough fillings that is, and the crust just properly cooked, not overdone.

As a last place to visit on restaurant day it seemed natural to search for sweets.

Near the largest movie theater complex of Helsinki there was a promising place featuring chocolates and sweets.

Finnish and German assorted chocolates as well as home made chocolates to buy per the 100g.

The place was called Goethe and the had also made these cookie cakes with their name on them.

There was also a chocolate fondue which you could dip pieces of fruit and marshmellows.

The taste was also good and was a fun ending to a very pleasant day.

Restaurant day is definately a great addition to city culture and a great way for people to socialize and have fun together. Info and future dates and cities can be found at Restaurant Day

Highly recommended for either taking part as a restaurant keeper or as a enjoyer of different tastes.

For a couple years there has been a city culture event in Helsinki by the name of Restaurant Day. Finland has ultra strict regulations on how food in restaurants must be prepared (hygiene etc) and also relatively high cost of rent and high taxes along with expensive labor. As such restaurants can be expensive to visit and expensive to run.

The idea of Restaurant Day is simple. For one day, 4 times a year everyone can make their favorite foods/ drinks /dessert and make a pop up restaurant at home or on the sidewalk or in a park. Choice is yours.

Location and name of the restaurant as well as the main idea is given before hand to the event coordinators who pro-bono help and provide a map with the locations of different places.

Last weekend was restaurant day and there were tons of different places to visit and different delicasies to taste.

Restaurant Day has boomed into a international event happening simultaneously in different countires and cities/towns. IT was also great to see how international the day was here in Helsinki as well.

Chinese dessert of tomatoes dipped in sweets was something I had never tasted before. Interesting and quite tasty.

Another fun spot was two girls who had come from St Petersburg to visit and give a taste of local cuisine.

Teddybear had also come from neighbouring Russia to visit.

All places seemed to draw small crowds which was excellent. The nice winter weather was also a plus.