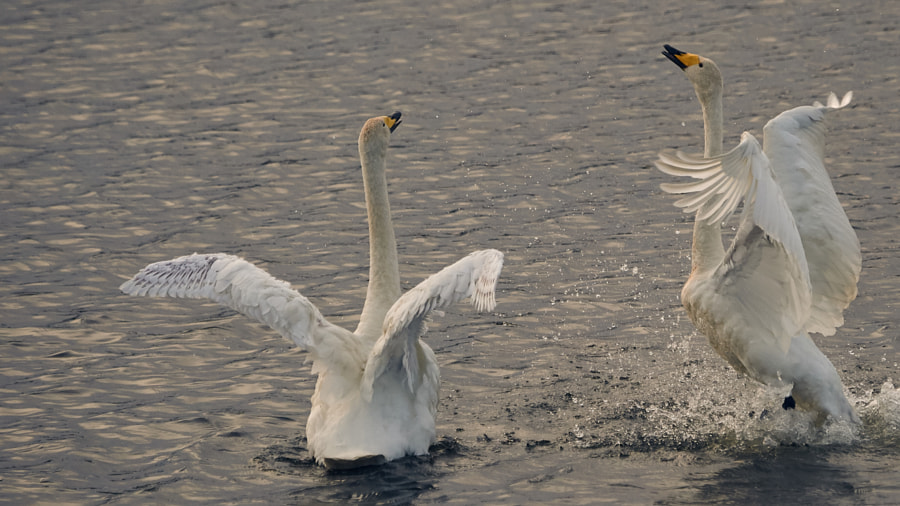 A reunion of swan couple. Whooper swans pair for life, and seem to have a very strong bond between the couple. These two were singing and saying hello to each other in a very beautiful and moving way.

We are closing in on summer.  Still only a couple of days ago eastern and northern parts of our fair land received fresh snow. But today, the forecast is for something altogether different. Soon it appears, that we will be having a hot spell in the region of 22-30 Celsius. Stupendously quick change of weather so to speak. The countryside of Finland is filled with fields, forests and lakes.

Such a view is quite common at the moment, fields growing green, trees getting leafs.  And nour national bird Swan in small groups and large.

Swans used to be hunted in Finland and that resulted in diminishing numbers and after strong debate it was protected as a species. Eventually the numbers have grown back. Now they can be spotted in small ponds and lakes and of course in large migration gatherings.
The species of swans that are pictured here and that is our national bird, is the whooper swan. They also sing with a beatiful voice from where comes the Finnish name “laulujoutsen” the Singing swan”.

A typical nest of a swan. A small pond, with a small island in the middle. And a nest. The swans form life-time “marriages” with their partners so there was another swan just outside the view of this photo as well. Pretty soon there will also be a couple of small ones around as well..

These ones had not yet found their partner and still moving in bigger groups.  Beautiful birds aren’t they?
Posted on 07/04/201407/04/2014 Posted in photo of the day, springTagged Finland, kevät, laulujoutsen, nature, nikon, Suomi, swans, whooper swanLeave a comment

Love can sometimes be tough. These swans were having a bit of a tumble. All is fair in love and war?

Btw as should be obvious by now, I love nature. I hope that the spring will bring many, many more great opportunities to capture beautiful moments like these.

We have had a sudden setback for spring and snow did a return. Today the weather was absolutely beautiful with fresh snowfall and sunshine and the temperature hovering between +1 and -1 Celsius.  A lovely day for sure.

Whooper swans are already re-migrating back home for a new season of family building in the lakes and ponds of Finland.

As luck would have it the weather was nice for a few days before the constant rain continued and I had the possibility to go look for a very special bird. The Whooper Swan is the national bird of Finland and it is always a part of the autumn to try and see them before they leave. Whooper swans are relatively shy and they usually live in the lakes of Finland with very tight territories where they will not allow other swans to visit. They are one of those rare breeds that form a life-long relationship with another swan and they come back to their home every spring and build their home and nest their eggs. The bigger families are said to have up to nine off-spring. Usually the amount is much smaller.

As the autumn comes, the whoopers form bigger flocks and come from their secluded lakes to the fields of southern coastal regions. Families gather together and form small groups within groups. The youngster still have dark feathers, so it is quite easy to see the family formations.

The take-off of big birds can be stupendous to watch. I wish I had beem a little closer but with birds this shy it is hard. And I cannot afford the 600mm, 800mm pro lenses for bird shots.

Beautiful and very much relaxing to see this sort of spectacle.

Spring has finally come, with the temperature close to +20 now today. Excellent.

Migrating birds have also arrived in force. The national bird of Finland ie Whooper Swan has come home as well .

Barnacle goose have also arrived in Helsinki. The species is supposed to live on the tundra in the north, but they have decided that city life is great in Helsinki so a big population now reside here as well.